Sole Purpose Productions is delighted to welcome an incredible cohort of artists, theatre companies and makers to celebrate 25 years of award winning theatre.

The Festival of Theatre for Social Change aims to address issues including the impact of Bloody Sunday, LGBTQ+ rights, breaking down barriers for deaf and disabled people and theatre from a range of Arab countries.

For a quarter of a century, Sole Purpose has been creating dynamic theatre that contributes to social change, explores human relationships and promotes good relations. For the Festival we are bringing together some of the most interesting shows that build on the twin features of Derry’s identity, both as a place of culture and as a site of historic importance in the struggles for social change.

Our work has always been steeped in activism, and we couldn’t be more proud to team up with an amazing selection of theatre companies and artists that share our passion for creating art for social change.

Running from the 14th to the 20th February, the festival will coincide with the annual United Nations World Day of Social Justice on 20th February in a number of venues around the city.

The play offers the audience an insight into the experience of families and witnesses who attended The Saville Inquiry. It is an abstract, poetic interpretation of the Inquiry. The production will be directed by Kat Woods and will be performed by Caoimhe Farren, Nicky Harley and Michael Johnston.

The festival also brings together national and international companies to stage some of the best professional productions that challenge people to think about contemporary and relevant issues.

Belfast-based Kabosh Theatre Company with their play Callings based on the lives of five gay/lesbian people who sought support and sanctuary through the Cara Friend phone helpline during the 1970’s.

The Palestine-based Freedom Theatre will present a rehearsed reading of The Revolution’s Promise, a collection of personal verbatim stories from Palestinian artists including filmmakers, poets, circus performers, cartoonists and actors who have worked on the frontline of cultural resistance and the consequences they have faced for their art.

The multi-award winning Khayaal Theatre Company based in London will present A Collection of Muslim Heritage Tales performed by Alia Alzougbi, a Lebanese-Syrian storyteller, actor and artist-educator. She will tell the tales of Waseela, Little Red Riding Hijab and Sabira. This is a family show for age 6+.

Yasmeen Audisho Ghrawi, a queer Iraqi/Syrian/Assyrian performer and theatre maker will present her one person show From the Daughter of a Dictator,  which explores the personal story of migration from Baghdad to Beirut to Berlin to Britain. She asks the question, is living in a democracy becoming so different from living in a dictatorship?

London-based Graeae Theatre, which is a force for change in world-class theatre, places deaf and disabled artists centre stage. During the festival, Graeae will do a three day residency with Derry’s Lilliput Theatre Company and on the final day there will be a sharing of what has been learned for an invited audience. They will also run a workshop open to the public on their working practices and creating accessible creative spaces.

Blue Eagle Productions from Derry Londonderry will stage the play Worlds Apart by Jonathan Burgess which examines the actions of ordinary people to facilitate the voice of the Protestant community within the city and the impact that has had over the years. The story focuses on two sisters – one who decides to leave the city in the early 70s and one decides to stay.

Dublin based Smashing Times Theatre will present The Woman is Present: Women’s Stories of WW11. This will include: At Summer’s End by Féilim James, a dramatic monologue told from the perspective of a Jewish-Irish citizen murdered in the Holocaust; and the short film The Shoah: A Survivor’s Memory – The World’s Legacy, adapted by Mary Moynihan from a speech by Simone Veil for the Second International Day of Commemoration in memory of the victims of the Holocaust.

There will be a rehearsed reading of Hello Charlie by Caoimhe Farren, a black comedy about trauma, sisterhood and breaking the cycle of familial addiction. The reading received a standing ovation at the Lyric Theatre.
Other performers include Sorcha Shanahan and Gemma Walker-Farren who are MakeyUppers, an original comedy storytelling act who use their skills as performers, facilitators and theatre makers to create dynamic and involving storytelling. They will be performing and workshopping The Mystery Bag with children's groups around the city.
This incredibly diverse and artistically exciting festival would not be possible without the support from Derry City and Strabane District Council, Community Foundation NI, Community Relations Council, Ulster Garden Villages and the Bloody Sunday Trust.

Sole Purpose is core-funded by Arts Council NI and we are extremely grateful for the opportunity to hold space for this work.

We would like to take this opportunity to thank every artist, every colleague, every venue and every audience member that will make this celebration possible. We look forward to seeing you there! 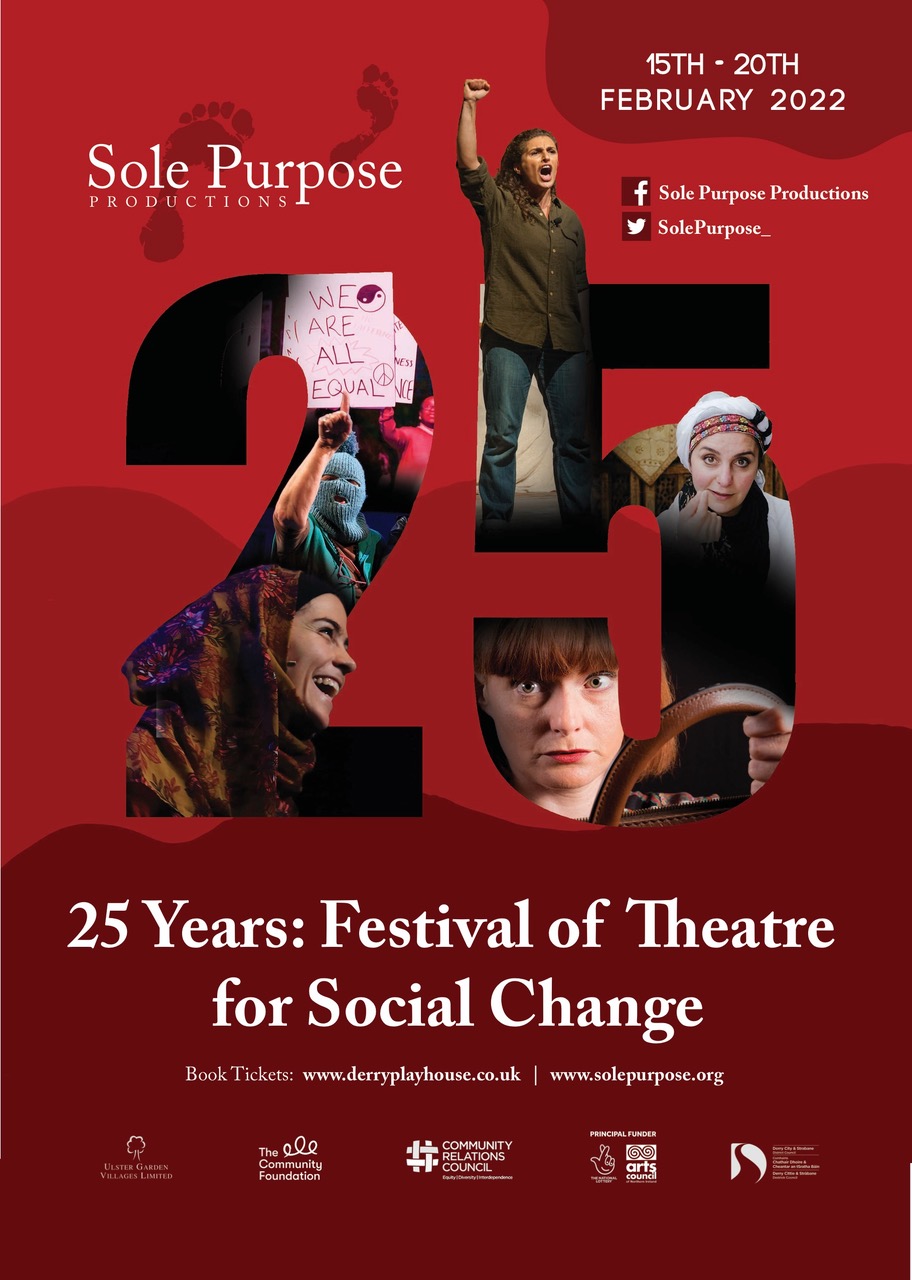